Ross Smith has had a career many would envy. In the Forces he has worked as a firefighter for the top brass in the RAF and the Royal Family. Then after qualifying as a paramedic he ran a team of ambulance drivers.

Super fit – he is virtually teetotal, has never smoked or taken drugs – he has completed the National Three Peaks Challenge and walked to the summit of Pen y Fan, the highest peak in Brecon.

But, behind the facade, Ross was a broken man. His marriage had crumbled and he was suffering from post-traumatic stress disorder (PTSD) after witnessing horrific scenes at work.

“There was a constant barrage on the front line,” he says. “I did a rough calculation of emergencies I attended. I was looking at 20,000-plus I’d been to in my career alone, of which one per cent were major stuff. That’s got to go somewhere.”

Ross even made two suicide attempts, driving to the coast to plunge off a cliff. He was only stopped by a text from a friend. He also scouted out the perfect place to hang himself, and set off, rope at the ready, before pulling back at the last minute.

But a chance introduction to Paul McKenna last November turned his life around after the celebrity hypnotherapist treated him with a new scientific therapy called the Havening Technique.

“He has totally transformed my life,” says Ross. “I was literally exhausted. I couldn’t socialise. I would get home from work, put all the shutters up and sit in darkness. I found myself curled up in a ball in the corner, crying like a baby.

“I couldn’t cook, couldn’t make a cup of tea, I wasn’t eating properly, I had isolated myself massively; I would just lie on the sofa for days. The only time I got up was to go to the loo. I just felt so ashamed.

“In the end I thought, ‘This has just got to stop. I can’t cope with the pain, the emotions coming thick and fast, the memories and the flashbacks all the time.’ I convinced myself that the best thing would be to end my life.

“I got in the car and drove down the M27 to Dorset – I was going to drive off a cliff – but just as I was turning off the motorway, I got a text from a friend saying, ‘Ross are you up for coffee at any point?’ “It was so random – she hadn’t texted me for weeks beforehand – but that brought me back to reality. I pulled over and stayed in a lay-by for what seemed like hours sobbing before I drove back home.’ It was not the last time Ross, 49, who lives in Emsworth, Hampshire, tried to kill himself.

“The other time, I chose a typical male thing,” he adds. “I don’t know why. I’ve seen so many hangings and the devastation that causes with the emergency services and family members having to cut someone down. “But I knew some nice walks and wooded areas where I wouldn’t be found for a while. I got in my car, had the rope with me and was driving towards my chosen location when I thought, ‘Wait a minute. There’s got to be more. I shouldn’t be taking my own life because of the effects of work.What a tragedy that would be’.”

PAUL, 55, saw Ross three times in the study of his £3million home in Kensington, west London, treating his anxiety, panic attacks, nightmares and hyper-vigilance with a combination of hypnosis, neuro-linguistic programming and Havening, a psycho-sensory therapy, developed by US neuroscientist Ronald Ruden.

The behavioural scientist adopted the technique, which involves “touching the sides of the arms, palms of the hands, lateral eye movement and some visualisations”, after taking part in a small trial at King’s College, led by Professor Neil Greenberg.

“I really love doing this work,” says Paul. “The people I’m working with are frankly heroes. They’ve put themselves in harm’s way so that we can all sleep at night or, like with Ross, on the frontlines, helping people in crisis situations with their lives and personally.

“Is this the cure for PTSD? Certainly it’s proving a very effective treatment. It is a very straightforward option for most people, with outstandingly good results. The scientific evidence is strong.”

Havening is backed by the former Field Army Commander, Lieutenant General Sir Graeme Lamb, who said: “I have watched with great interest the Havening Technique and been struck by its potential. To me, the impact is real and definitive, and I like and trust both Dr Neil Greenberg and Paul McKenna, who along with King’s College London have been pioneering this work.”

Ross’s story shows how mental health problems can affect anyone. The son of a soldier – his father was in the Royal Lancers – he grew up with two brothers and four sisters in a military town in Germany.

His parents divorced when he was a teenager and he followed his father into the services, joining the Royal Engineers before switching to the RAF as a firefighter.

His first posting was at RAF Upavon, where he went on exercise with the special forces ONWILTSHIRE’s Salisbury Plain. “I wasn’t a fighting soldier like the Parachute Regiment and the Marines,” he explains.

HIS next posting was at Air Command HQ, RAF High Wycombe, a top-secret base, where his unit provided “immediate fire safety cover”. “If there was a fire in one of these, you can’t just get civilian firefighters in because they haven’t got security clearance,” he says.

Finally, he was transferred to RAF Northolt, one of 15 firefighters, employed to protect the royal helicopter. There he regularly met members of the family, shaking the Queen’s hand when she visited, driving Prince Charles and working with Princess Diana.

He last saw Diana in May 1997 – three months before her death – when she opened Leicester’s Richard Attenborough Centre for Disability and Arts.

“It was a baking hot day and I was in the front marshalling the helicopter into position,” he recalls.

‘I was in a very thick green uniform to protect me from fire, and I was literally dripping with sweat.

“As she got off the helicopter, she made a point of coming over to me and saying sorry for being late. ‘Gosh, you look so hot in that uniform,’ she said. I was speechless.” The following year, Ross left the RAF and joined the Queen’s Helicopter Flight. But the long hours took their toll on his marriage to wife Roma – he had two daughters, Shannon, eight, and Bridie, three – and he decided to retrain as a paramedic.

He joined the Hampshire Ambulance Service in 2001 and now manages a team of 30 paramedics. But he couldn’t save his marriage and found his life spiralling out of control.

One incident he was called to, in June 2010, tipped him over the edge. Sarah Harris, a 35-year-old mother, was left permanently blind in one eye after her jilted lover Martin Adams, 42, stabbed her 15 times with kitchen knives. He was later jailed.

“It was absolutely awful,” recalls Ross. “She was lying on the floor with the radiator on top of her – he had thrown her against it, and it had come off the wall.

“There was blood everywhere. She had puncture wounds all over her and her eye was like raspberry jam because she had been stabbed three times in it.

“I just broke down and stopped mentally. I couldn’t stop crying for the rest of the night. I can still see the scene and smell the blood now.”

Ross ploughed on, bottling up his feelings, until, four years ago, he had a breakdown at work. It was then that he was diagnosed with PTSD. “I might as well have won the lottery that day,” he smiles. “It was the best day of my life because finally I had a diagnosis.”

Then last November he was referred to Paul through a colleague. “I thought it was worth a try as I tried everything else and nothing seemed to be getting me through that massive bramble wall.

“I didn’t know what to expect but Paul was so lovely and friendly. He just looked me in the eye and said, ‘I understand, I know what you’re going through and I’m here to help you.’ From that point on I’ve had a massive smile on my face. I thought, ‘Thank you, God. Thank you someone for helping me.Thank you, Paul’.” 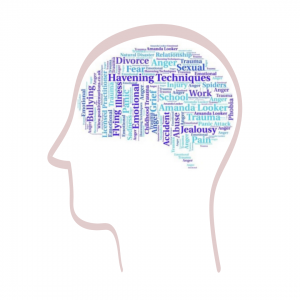